Going Active - Worth It?

Passive crossovers that are supplied with your car audio components, are often nicely packaged in a fancy box including a series of capacitors and inductors that the speaker manufacturer designed. You end up having to dedicate a place somewhere up and out of the way, free of moisture, to safely and securely install them.

What is there to gain by ditching these chunky passive crossover networks?

The crossover points in a car audio system are more important than any other audio reproduction medium. This is because we often have limited real-estate to work with, thus a fixed set of speaker sizes & placement options.

For example, in home audio, a typical set of bookshelf speakers have a similar tweeter and mid-range combo as a car audio component set, except the tweeter and mid are mounted inches apart on the same axis. This is typically not the case in an automobile. Also, in home audio, speakers are generally much farther away from the listener, so having the ability to adjust your crossover points isn’t nearly as crucial.

When you use the supplied passive crossovers included, you’re using crossover points that were based on average car audio speaker placement & distances. This is limiting because all cars come in different shapes and sizes, and you want to be able to fine tune crossover points that are tailored to your specific speaker layout.

Going active, gives you the ability to change your crossover points and slopes to better suit your speakers and their unique placements. We find that most cars have a crossover 'sweet spot' that just cannot be attained without the adjustability of actively crossing over your speakers.

In that passive crossover box, we were talking about, you’ll often see switches or jumpers with dB adjustments of +2, 0 and -2 when it comes to changing the level of the tweeter. It’s nice that they include any sort of adjustment, but we find this simply won’t do.

Our ears are the most sensitive to higher frequencies. When it comes to the higher end of the frequency spectrum 2dB increments is too big of a step when it comes to dialing in your system. Especially in a car where you have reflective surfaces galore. Having the ability to precisely level each of your components individually is essential to getting your stereo imaging right on the money.

Using your supplied passive crossovers, ties (at least) your tweeter and mid to a shared amplifier output. This means you can’t delay the tweeter and mid individually. Unless you have your all of your speakers on dedicated channels, true time alignment cannot be achieved. This is definitely one of the lesser talked about benefits of going active.

Time alignment fixes issues with phase, imaging, and sound stage that is imperative to making your system sound great.

More Power to Your Speakers

Active systems with the same equipment will be louder than the same system using a passive crossover. This is because amplification is happening before the crossover that then burns the filtered frequencies off as heat before getting to the speaker.

Passive crossover networks waste your amplifier's power. On average 60% of the amplified power makes it to the speaker through a passive crossover network. By crossing over the source signal before amplification, none of that power is wasted or burned off as heat. This way you’re only amplifying the frequencies you specify, instead of filtering them out after the fact.

If you’ve heard a well-tuned, fully active system, you know there’s no comparison to its passively crossed over counterpart. This is because even the most intricate and well-designed passive crossovers, introduce distortion and potentially phase issues, that a digital crossover will not.

When talking about active systems we’re namely pointing to the use of a DSP (Digital Signal Processor) which has the capability to even further dial in a system with even more tools, like a '31-band channel-separated equalizer' for example.

Adding a DSP to your system is the best way to accomplish this, and take your system to the next level. 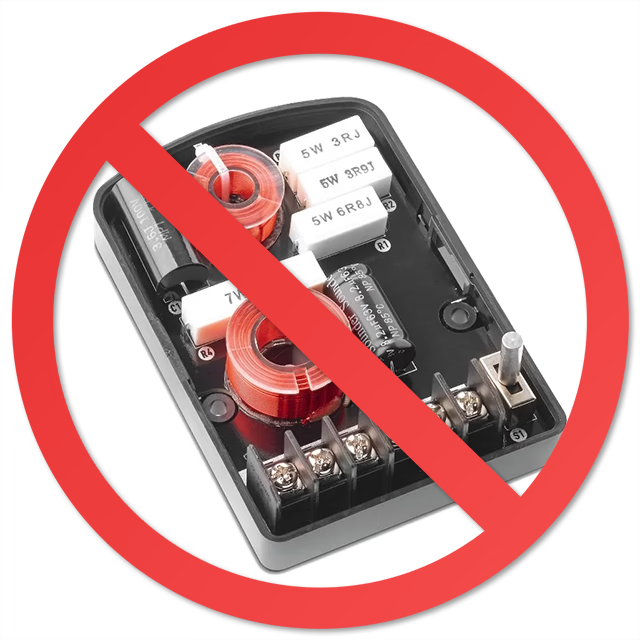 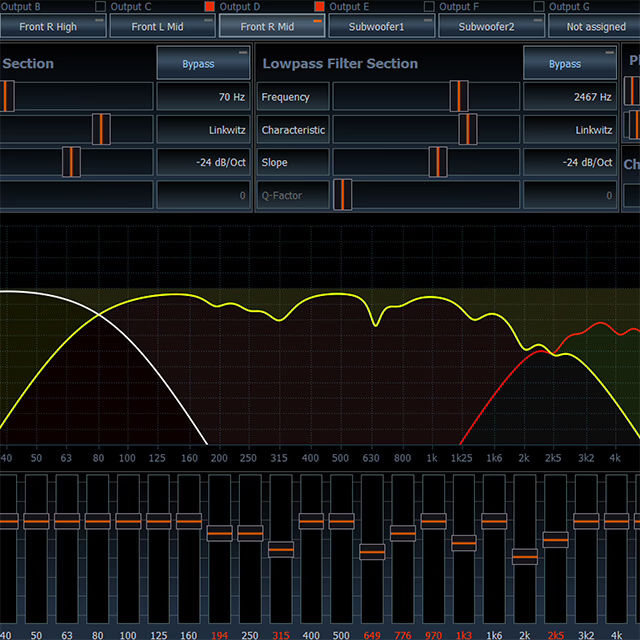